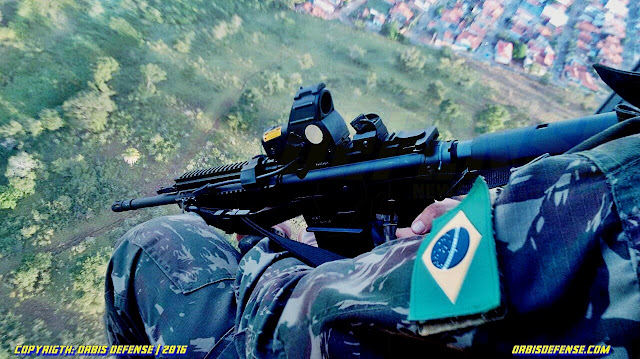 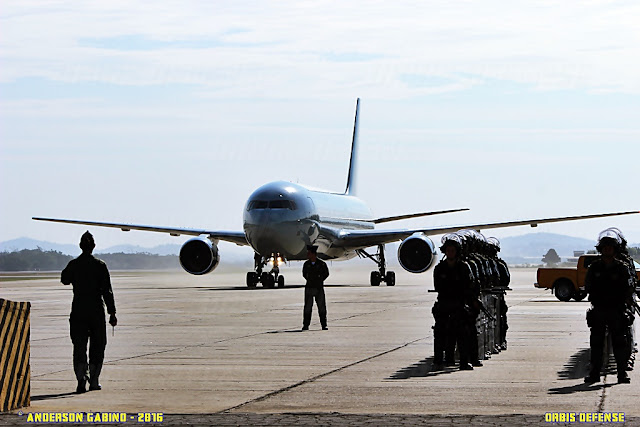 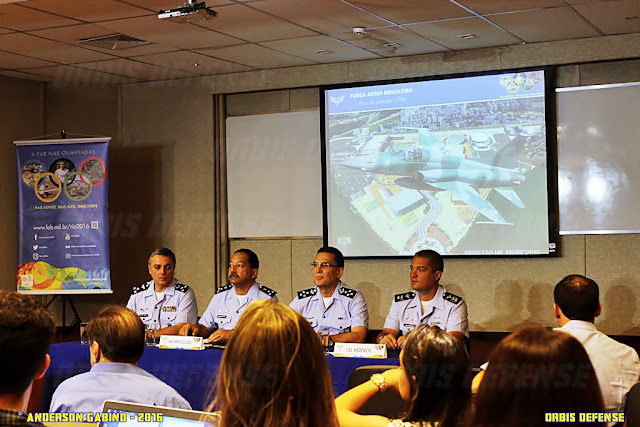 Speaking at the Farnborough International Airshow 2016, Ran Kril, executive vice-president of International Marketing and Business Development, said with the Targo HMD already in use by the Israeli Air Force (IAF) on its Alenia M-346 Lavi trainer jets ahead of the introduction into national service of the F-35A Adir later this year, it is more than likely to be rolled out to the international JSF fleet at some point in the future also.
"The F-35 is the first combat aircraft without a head-up display and with a helmet [-mounted display system] only, and so the pilot must train with a helmet. In the IAF, the Targo is already mandatory with the M-346, and as most F-35 countries fly with [other] Elbit helmets in their F-16s already we see the Targo as the future baseline standard [for training]."
First showcased at the Paris Airshow in 2009, the Targo HMD uses a standard helmet, onto which is fitted a software module that removes the need for integration with the host aircraft. The HMD employs a visor-projected display for day operations, complemented by a separate clip-on night module (featuring night-vision goggles with display injection) and a simulation module that allows pilots to plan, rehearse, fly, and debrief missions using their personal helmets.
The system offers a training solution for aircraft such as the M-346 without operational radars, live air-to-air and air-to-surface missiles, or electronic warfare (EW) systems, with colour or monochrome symbology projected onto the inside of the helmet's visor, giving the system a 20° field-of-vision (FOV). If the target or threat is outside of the FOV, a target locator line (TLL) directs the pilot where and how far to look to bring it within the helmet's FOV.

The MBDA Meteor air-to-air missile (AAM) has entered service on the Swedish Air Force's (SwAF's) Saab JAS 39 Gripen aircraft, making it the first fighter to operate the very long-range (100 km+) missile.
Introducing the missile, termed a beyond-visual range air-to-air missile (BVRAAM) by MBDA, came as part of the MS20 upgrade to the Gripen. This also included clearance of other new functions to the Gripen, including the Boeing GBU-39 Small Diameter Bomb (SDB), full implementation of the Link 16 datalink, as well as radar and other enhancements, Major General Mats Helgesson, chief of staff of the SwAF stated on 11 July at the Farnborough International Airshow 2016.
Maj Gen Helgesson added, "Meteor is in our perception the most lethal radar guided air-to-air missile in operational service in the world, and the Swedish Air Force is the only operational user so far. Combined with the IRIS-T heat-seeking missile we have the best air-to-air weaponry you can find in the world."
Meteor is consistently referred to as a game-changer by militaries and industry involved in the development of the missile. This is because of the extreme range of the missile and that its dual rocket and ramjet propulsion system continues to provide power and acceleration even at maximum range. Traditional rocket-powered AAMs tend to only be powered for their initial flight phase, and thus suffer significantly reduced performance in their terminal phase when at maximum range.
Explaining this, Maj Gen Helgesson said, "With this revolutionary capability of the Meteor, Gripen can engage targets with less risk for our pilots. This is not only because of the superior kinematic performance it's also because of the superior no escape zone of the missile, the smart control of the ramjet engine optimises the trajectory and speed depending on the situation in order to maximise the no-escape zone." 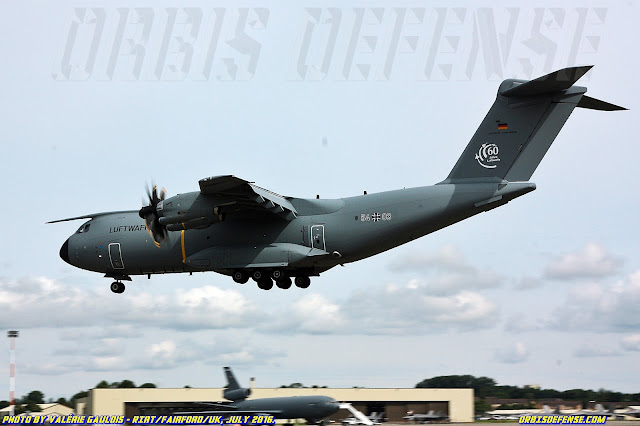 Airbus Defence and Space (DS) is progressing with the expansion of a static line parachuting capability from the A400M airlifter, with the conducting of a successful trial that saw 30 paratroopers land at the Tarbes drop zone in southern France.
Certification of the capability for this number of paratroops is expected imminently and has been undertaken with the European Aviation Safety Agency (EASA) as well as the Certification and Qualification Committee made up of representatives from OCCAR and the A400M programme nations. The certification process has involved increasing the number of paratroopers being dropped in increments of 5 and is working towards a total of 40, with an eventual target of 58 exiting the aircraft from one side door. The original static line paratrooping requirement set by OCCAR and the A400M programme was dropping 116 paratroops in a single pass.
Speaking to IHS Jane's at the Farnborough International Airshow 2016 on 12 July, an Airbus DS official said trials were also conducted on ranges at Zaragoza in Spain and Pau in France when these became available; the availability of troops was also a factor in when the trials could be carried out. One reason for increasing the numbers in increments of five is that the quantity of static lines attached to the aircraft builds up following the jumps, which could affect airflow characteristics.
The airflow around a large transport aircraft leads to the risk of collision between jumpers during simultaneous paradropping operations from both side doors, and as a result the A400M is restricted to drops from one door only. According to the Airbus DS official, the percentage risk of troops hitting each other has to be modelled to determine the level of acceptable risk, but this has to be validated in flight trials owing to the numbers of variables involved. 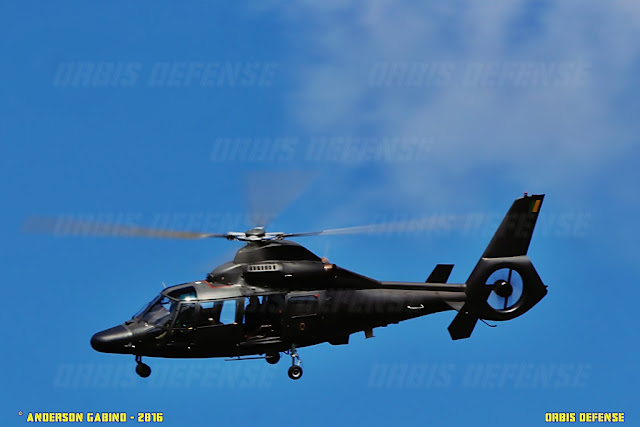 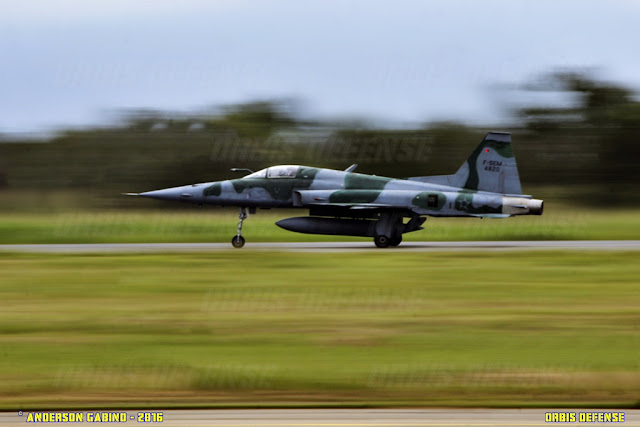 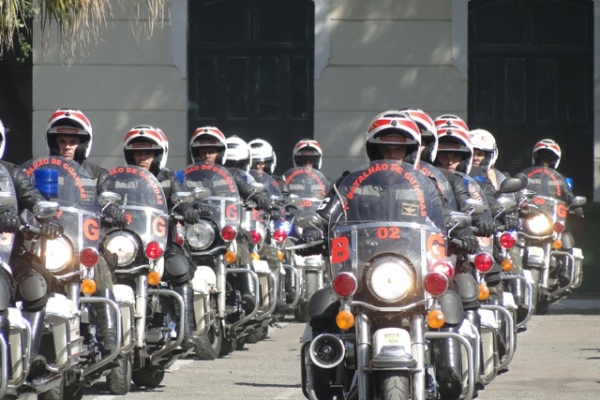 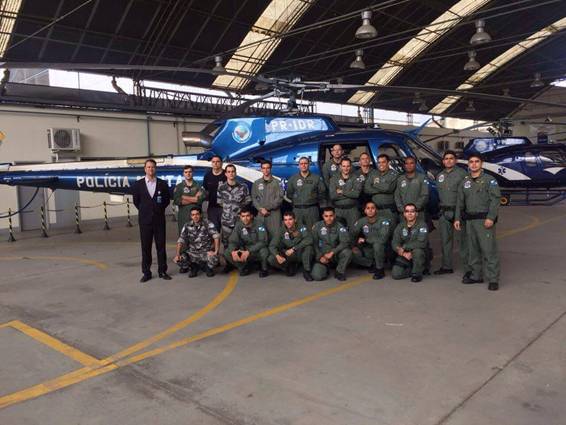 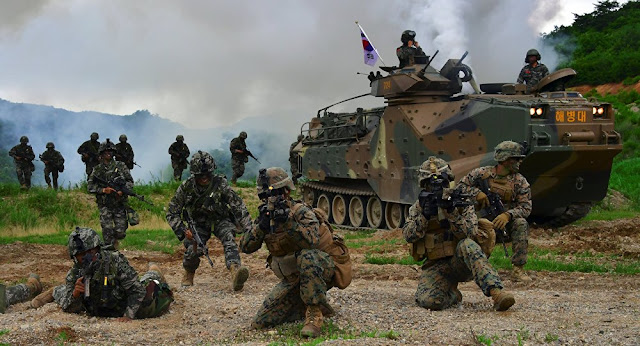 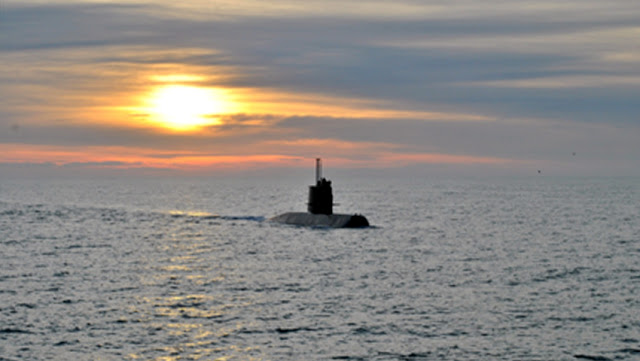 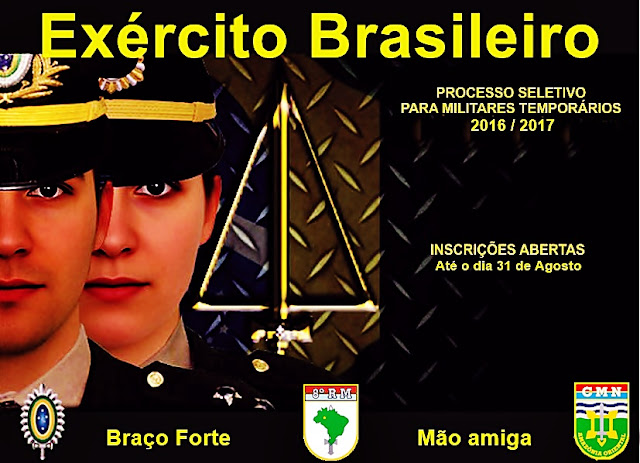 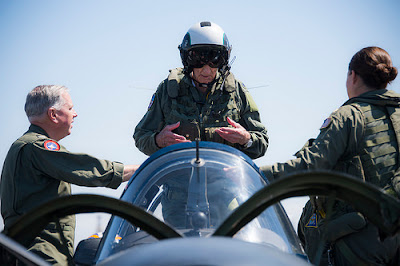 A 95-year-old, 29 1/2-year veteran famous for being the single-known ace to achieve victories against both German and Japanese aircraft during WWII and later becoming a stunt pilot for 20th Century Fox film "Tora Tora Tora" in 1969, flew his 100th aircraft above "the birthplace of naval aviation," July 9.
Retired Cmdr. Dean "Diz" Laird served in WWII, Korea and Vietnam, operated in 175 combat and training missions, served on 12 different carriers, flew in the Navy's first jet squadron, was the first person to land a jet-powered aircraft aboard USS Midway and has the most arrested landings on a straight-deck carrier.
"I want to thank everyone who took part in making this happen," said Laird. "When I found out that I was going to be able to do this, I was shocked. I couldn't believe it."
Laird added that flying his 100th plane wasn't for an achievement, medal or trophy. He wanted to set this milestone for himself.
Mais informações »
Postado por Orbis Defense às terça-feira, julho 12, 2016 Nenhum comentário: 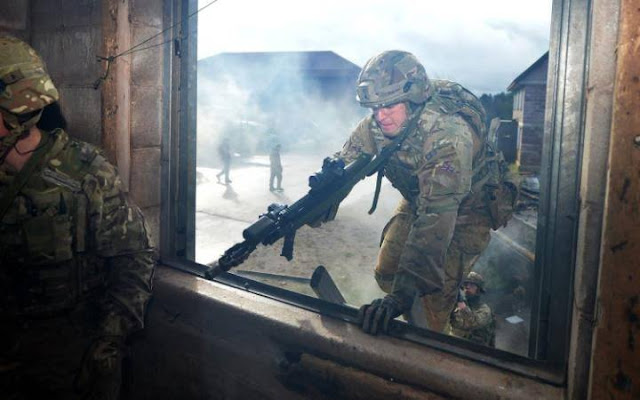 By Wording OD
L-3 Communications displayed its SPYDR II tactical intelligence, surveillance, and reconnaissance (ISR) aircraft for the first time at this year's Farnborough International Airshow.
Integrated onto a Beechcraft King Air 350 twin turboprop, which at Farnborough was sporting the green and sand-coloured paint scheme of a 1970s-era F-4 Phantom fighter, the SPYDR II builds on L-3's previous work on the SPYDR I King Air 350 ISR platform but features the company's Rapid Aircraft Payload Deployment System (RAPDS). This turns the aircraft into a truly reconfigurable plug-and-play ISR platform in which any given sensor fit can be swapped out within a matter of hours, enabling the user to tailor the sensor payload to changing operational requirements or to incorporate upgraded sensor technologies as they emerge. 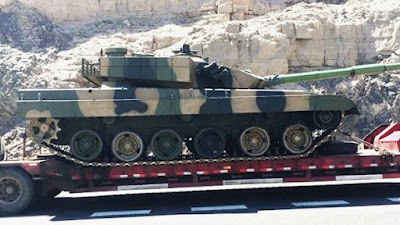 One of China's biggest military manufacturers, China North Industries Corporation (Norinco), has developed a new variant of its Type 96 (ZTZ-96) main battle tank (MBT) in time to participate in the 30 July to 16 August International Army Games organised by the Russian Ministry of Defence.
At least five T-96Bs arrived in Russia on 7 July to take part in the Masters of Automobile and Tank Hardware competition, according to Russian media reports. The 'Tank Biathlon' portion of this competition received wide coverage in Chinese state media last year when Norinco's 50-tonne T-96A MBT was allowed to participate.
The new T-96B variant was revealed on Chinese online forums on 5 July by a blogger posting a video of the tank on its way to high altitude testing. Two days later images emerged of the new tank beginning its trip to Russia.
Except for an improved ventilation system, the T-96B appears to show no visible changes to the turret, optical sensors or main 125 mm gun armament.
Unconfirmed Chinese reports indicate that computer and digital communication systems have been improved, allowing tank commanders to benefit from common integrated intelligence of the battlefield processed at higher levels of command.
The reports also point to improvements reportedly made to the T-96B's engine, exhaust system, suspension, and running wheels.
The engine and new rear-mounted exhaust system appear to have benefited from those developed for Norinco's VT-4 export MBT. If this is the case, the T-96B may have a 1,200 hp liquid-cooled diesel engine.
Other Chinese reports indicate, however, that the T-96B may have only a slightly more powerful version of the T-96A's engine, with an output closer to 1,000 hp.
The T-96B appears to have lighter-weight running wheels and a modified suspension that could increase the reliability of its tank tracks. 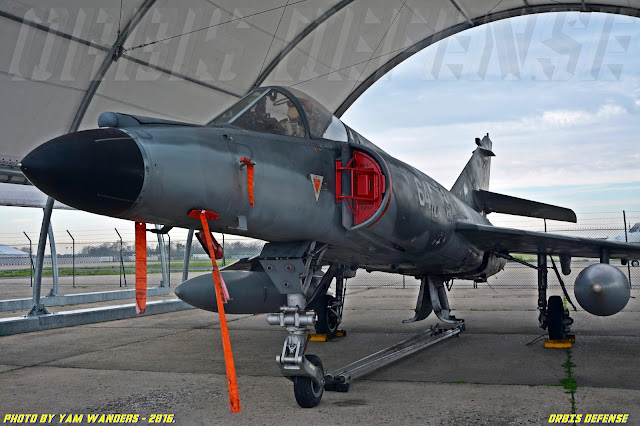 Will Ukrainian troops launch a new offensive in the Donbass?

Russia is warning that Kiev may launch a new offensive against supporters of the self-proclaimed republics in the Donbass region of eastern Ukraine. Moscow is urging Paris and Berlin to put pressure on the Ukrainian authorities to prevent a potential renewal of violence.

As hostilities threaten to break out again in eastern Ukraine, Moscow is warning that Kiev may be on the verge of launching a new offensive against the self-proclaimed rebel republics in the region.
At a meeting with the German and French ambassadors on July 6, Russian Deputy Foreign Minister Grigory Karasin told them that heightened tensions in the Donbass indicate that the Ukrainian troops are preparing for action to try and take back territory occupied by Russian-backed rebels as part of a two-year-old conflict with the central government in Kiev.
Karasin urged the two ambassadors, who represent the two countries whose leaders – alongside the presidents of Russia and Ukraine – form the four-party negotiating group for resolving the Donbass crisis, “to exercise their influence to put pressure on Kiev in order to prevent a military scenario…”
On the following day, the situation in eastern Ukraine was discussed in a telephone conversation between Russian President Vladimir Putin and his U.S. counterpart Barack Obama.
This time, a similar appeal was made to the Russian leader in relation to the rebel regimes in Donetsk and Lugansk, which enjoy Moscow’s patronage. Obama asked Putin to “take measures to end the significant uptick in fighting in eastern Ukraine.”
Fears regarding a dramatic increase in hostilities in the Donbass were voiced not only in Russia but in Ukraine too. Kiev linked this eventuality to the Kremlin’s desire to destabilize the situation in Ukraine as a whole and in the Donbass in particular. Ukrainian parliamentary speaker Andrei Parubiy said that Moscow may be tempted to do it against the backdrop of “the U.S. election and the crisis in the EU.”
Mais informações »
Postado por Orbis Defense às segunda-feira, julho 11, 2016 Nenhum comentário: 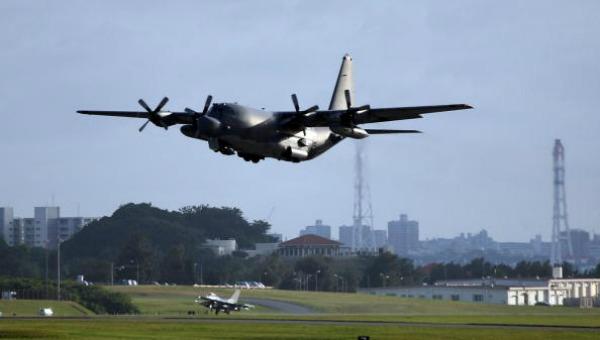 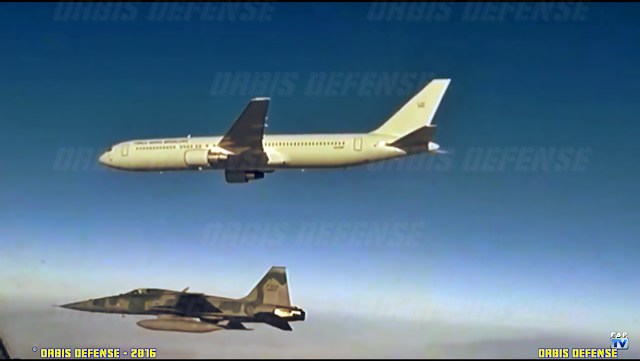 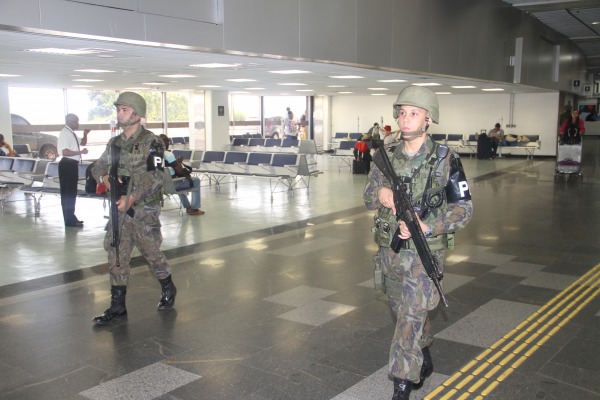 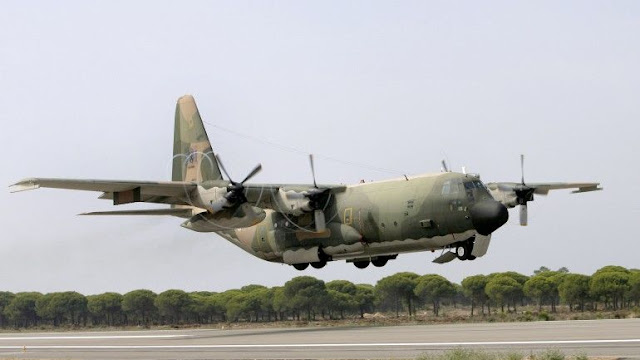 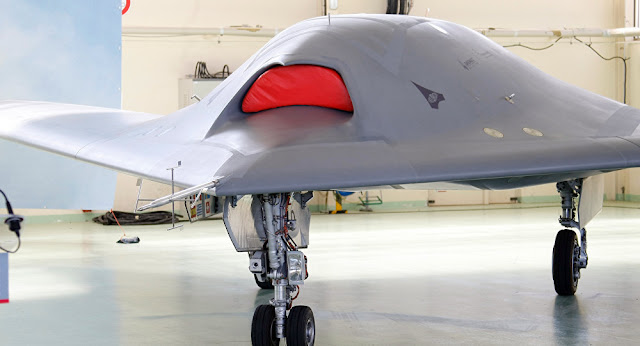